Theres a concept in Tibetan Buddhism (and I think used in other Buddhist traditions) called the Wheel Of Life.  It’s a great mandala, showing the cycles of the world, clutched in the hands of Yama, lord of death.  It’s a vast, symbolic work that you could spend ages analyzing as it represents the sources of suffering, the nature of living beings, and the liberation off the wheel.

Most notable – and famous – are the various realms of existence portrayed on the wheel.  The lore states that there are six realms one can be born in:

Devas – The gods.  Beings who enjoy bliss and pleasure and power.  However, Devas do age and die, and their happiness often means they don’t develop wisdom or compassion.

Asuras – The Angry Gods, sometimes translated as “Titans”.  They conted with the Devas.  Powerful, fierce, and forceful they’re also jealous and paranoid.

Humans – That’s us.  We’re usually ignorant, but also are in a balanced world and state where we can learn wisdom, compassion, and get off the Wheel via enlightenment.  We’ve got anger and bliss and so forth, but it’s not overwhelming or crippling.

Hungry Ghosts – The realm of addiction.  Hungry Ghosts are mournful spirits haunting various desolate parts of the world, seeking to consume things they desire and unable to enjoy them.  Scary-looking, they’re rather pathetic creatures.

Hell Beings – The realm of fear and anger.  Hell beings are born to torment in this horrible realm.

Metaphysically it’s an interesting cosmology, but it can also be viewed as metaphorical – that these are different psychological states we can experience.  I’ve seen the psychological model talked about by a number of people, such as Mark Epstein and Pema Chodron; it’s really fascinating.

If you think about it, at any moment we can be one of these states: bliss, fierceness, balance, desire, craving, and fearful anger.  Throughout the day we can be a god or a hell-being or a human.

Look around you.  Celebreties that want not are Devas.  The competitive and driven achievers are often Asuras.  Humans are those who “get” it or deal with human ignorance (I find comedians are very Human).  Animal behavior can be seen at many a party or bar or in a humorless politician afraid of “them.”  Hungry Ghosts are anyone with an addiction they feed but get no satisfaction from.  Hell Beings can be found in any anger-filled internet forum or screaming from your TV.

(Now, this is just using the Wheel as metaphor.  If you think there’s any valid metaphysical truth to this, then it brings further home the simple lesson of being responsible as what you do has repercussions).

This leads me to my dog, Lucy, who passed away this week.

Lucy was a very human dog.  If you believed in actual reincarnation you could see her coming back as a person.  She was affectionate, good natured, pleasant, caring, and smart.

I realized that she made me a better person.  Her affection really awoke affection.  Her loyalty awoke loyalty.  She showed and brought out the best of human traits.

Lucy really cared.  Lucy really loved.  Lucy in short was a reminder that the joke “Let me be the person my dog thinks I am” has a lot of truth to it.

She made me more Human.  Lucy is already back – in what she inspired in me.  She’s already Human.

Think about how you raise and lower people to these different realms. 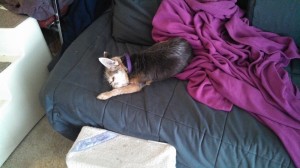 Steven Savage is a Geek 2.0 writer, speaker, blogger, and job coach.  He blogs on careers athttp://www.fantopro.com/, nerd and geek culture at http://www.nerdcaliber.com/, and does a site of creative tools at http://www.seventhsanctum.com/. He can be reached at https://www.stevensavage.com/.