I’m going to start with a rant, but this is actually about re-finding a real spirit for the Holidays, so hang with me.

2013 is the year Christmas finally became meaningless to mean. The shopping season gobbled up Thanksgiving. The usual complaints about the nonexistent War on Christmas were extra stupid (but I’m sure moved books and sold merch), and we got to see a newscaster argue that a holiday figure partially based on Turkish Saint and a Mediterranean Jew were white guys and that this somehow mattered for the kids.

Frankly, I was feeling tired, cynical, and fed up. I like the holidays, I like the fun, the festivity, the feasting, and the gift-giving. I like the gratitude and the simple things.

Not so found of the ever advancing Shoggoth of BS that Christmas has degenerated into over time. Somehow it seems to get stupider and more commercial each year, and we’ve been warned about the commercialism since those old Charlie Brown Christmas specials.

Then, something got me thinking.

After the bizarre “Santa Claus is White” thing popped up, I started wondering about Saint Nicholas, one of the influences on the Santa Claus image. Now when you read about this guy, his story is pretty cool; he was generous, humble, and put up with some oppression from authorities and came out with his dignity. Also at one point he punched a guy over doctrinal differences, but hey we all loose our temper.

My favorite story is the tale that anointed him as a gift giver, when he secretly gave money to three daughters without dowries, saving them from unsavory life choices (slavery or prostitution). That’s a pretty cool legend, frankly, so I can see how this and his other tales make Nicholas pretty beloved. He protects against famine, and helps people out.

It was nice to read a story about someone being a good person.

This is my Christmas Display. A Festivus pole made of DBZ-themed soft drink cans, a home-made icon of Saint Nicholas, and a statue of the Buddha. 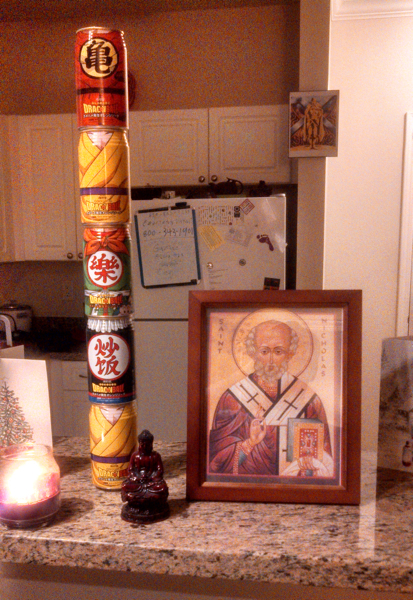 The Festivus Pole is my response to the entire made-up War On Christmas B.S. There’s no War on Christmas, it’s just something that your various pundits and preachers and politicians gin up to get attention, votes, donations, and move merchandise. That’s it. People who think there’s a War on Christmas are being had. So I’ve got the Festivus Pole as my sort of response to that – a made up holiday, a Festivus for the Rest Of Us, and a simple pole made from stuff lying around.

I also dig the simplicity in the wake of over-decorating.

The Saint Nicholas Icon is because as noted, his legend includes some cool tales of generosity that are humble, heartfelt, and meaningful, and he didn’t flaunt generosity like a new wardrobe. I may not be Catholic, or Christian, but the more I read about this guy the more I think our Christmas needs a visit from Saint Nick and less of Santa Claus hawking goods. Be generous and help people in ways that change their lives.

Finally the Buddha statue. I’m pretty much a humanist with mystical inclinations, but some Buddhist lineages and teachings really influenced me and my understanding of generosity and compassion. So he’s got a place here. I’ve also been influenced by Confucianism, Taoism, Humanism, and assorted other philosophers and theologians, but he seemed most appropriate.

At first I set this up just sort of to do something and get a bit of holiday spirit of some kind. Now, looking it over, it feels pretty good. It’s almost a kind of back to basics – an icon of the holidays (however derived from parody) that’s simple and some images reminded you to be a better person and care about people. That’s a pretty good start – or maybe that’s all we need.

So I’ve got a secular holiday icon that appeared in a show created by a Jewish comedian next to a Catholic Icon of a Turkish guy, next to a statue of a religious/philosophical figure born in India. That makes it also pretty damn AMERICAN in my book.

So, I’m gonna keep this up and I may well have my own new Holday tradition. Every year put up the pole to do it my way. Put up an icon of Saint Nicholas to remember the good influences on the holiday. Put up my own religious or philosophical icons to remind me of what’s guided me. Then spend the holidays trying to do good things.

Merry Christmas and Happy Holidays to all of you.