I can’t say I’m a fan or not a fan of Disney.  Disney’s omnipresent enough it sort of doesn’t make sense.  But their upcoming show Descendents, which is a school drama where the children of four villains experience (?) redemption among the children of heroes sounded sort of like Ever After High envy . . . and the first picture isn’t promising. 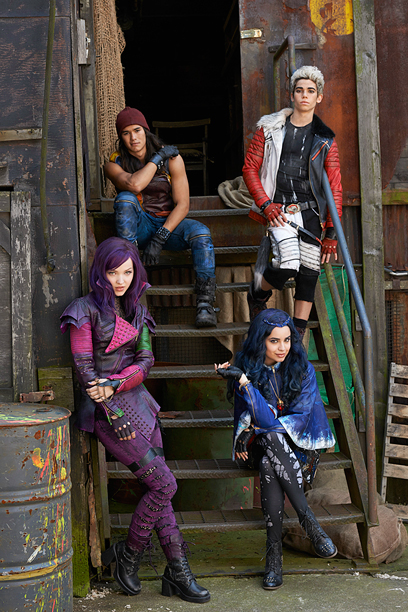 Now I won’t cast aspersions on the young actors.  If Disney taps you for some big, if insane, effort, you go. You get to play a Disney Villain, which almost without exception are a heck of a lot of fun.  But as for the characters:

So really it looks like Generic Punks causing trouble.  I’m still figuring out how the descendent of a world famous fashion icon ends up in a magical world.  Maybe mom got a taste for dragon skin dresses and things went terrible wrong.  Which is probably better than this plot.

Steven Savage is a Geek 2.0 writer, speaker, blogger, and job coach.  He blogs on careers at http://www.musehack.com/, publishes books on career and culture at http://www.informotron.com/, and does a site of creative tools at http://www.seventhsanctum.com/. He can be reached at https://www.stevensavage.com/.

Seems we’ve got a lot of interesting news lately.

Disney/ABC is having layoffs.  Interesting but not unexpected as the company is obviously changing focus.

Did you know we export garbage in the US for recycling?  Did you know China isn’t taking some of our stuff anymore?  Politics, science, and recycling intersect in a must read article that will remind you just how complex the global economy is.

Food for thought.  Can a donation model work for streaming music?

Al-Jazeera America’s strategy includes a return to news styles we’re kind of missing.  I’ve been concerned that America’s quality of news – sensationalistic, specialized, and for short attention spans – leaves us vulnerable in a global market.  Sure Al-Jazeera has reputation issues now, but what if they overcome them?

Yes, after weeks of me ranting about what’s going on in gaming, what it means for your career, and why I’m still confused half the time, there is a trend I distinctly want to call out.

Merchandise-game integration.  Let’s call it MGI so we have a cool acronym.

Awhile ago at NerdCaliber I called out that we were on a cusp of a trend where games were integrated heavily with merchandise. and marketing.  My example was Disney Infinity, which was pretty much “Skylanders” with Jack Sparrow and a sandbox mode.*  I felt this was one to watch because I could see a lot of properties done MGI style, and transcending some of the previous attempts out there.

(Disney is so confident, they don’t mind a delay – that may mean selling more)

Ironically, of the many properties I discussed where heavy MGI possibilities lay, I missed one, and of course some smart guys and girls ended up creating the most obvious MGI I could have seen, only I didn’t see it.