(This column is posted at www.StevenSavage.com  Steve’s Tumblr)

Management consultant Erwin Van Der Koogh wrote an essay on tech and how women are treated, “This industry and living life on the lowest difficulty setting,”  Go read the entire thing, but he pretty much sums it up by noting that at a tech conference his worst fear is making a mistake, but a female colleague’s worst fear is sexual assault and harassment.

It pretty much sums up issues of women in tech in that they face inordinate issues men don’t face, and these issues are pretty horrific.  When people say white male is the lowest difficulty setting in, say, tech, that’s because we’re not facing the same challenges.  We’re playing a game with infinite lives; women are playing Dark Souls III.

His experiences and those of the woman he writes about are not alone.  I’ve talked about bias in tech to a room nodding sadly.  Everyone in tech who listens can hear stories about sexism.  Just watch the news in tech, and stories of bias pop up repeatedly.

It’s wrong on any number of ethical levels, moral levels, societal levels, and civic levels.  Bigotry of any kind is corrosive, acid on the soul, eating away decent things.

It’s wrong in tech, an industry that should put ideas and work and creativity first – but too often doesn’t.  When someone’s gender matters more than their work, then that’s anathema to what we’re supposedly about.

And as a white guy – and if you’re one of me in tech – as Erwin points out, we need to make an effort to solve it.  I’ll put it simply – we’re having a comparatively easy time, we have the (at times unwarranted) attention, so we have the ability to make a difference, and we should.  Else we’re letting our industry be something it shouldn’t be, as well as letting our fellow techs drag themselves down with their own bias.

Tech should be what we think it is.

Erwin proposes solutions where we work on ourselves, which is vital.  Start with yourself – I can thank my lucky stars I had several female managers and co-workers that helped me see sexism and deal with it.

I’d say we also need to call out sexism in tech when possible, be it in person or on Twitter or whatever.  Just get into the habit of it.

However a big thing we should do is change the culture of tech.  To do that, there’s plenty of places to get involved in REALLY changing the culture – the organizations.  If you want to make a difference promote these or help out.  We change the culture by getting involved and supporting women getting into tech – and staying there.

The resources are there.

Star Wars – The Force Awakens: Fear Of Another Blackness And Another Femininity

Few of us who are geeks on the internet (perhaps I repeat myself) are unaware that some people are offended at “Star Wars: The Force Awakens” – over racial and gender issues. It’s not hard to find people complaining that:

I’d go into why people seem to be disturbed by these completely unremarkable things, but it’s a bit hard to describe it beyond “bigotry and weird conspiracy theories” that seem to be a cover for assorted personal insecurities.  Actually that is my explanation and what you do see on the internet.

We may shrug off these reactions as simple racism or sexism. We may laugh at the strange reactions or convoluted conspiracy theories conjured up about the cast and film. We may be offended (and understandably so). But there’s another issue about those offended at the race and gender of the leads I’d like to address.

Whatever the reason or the convoluted explanations people seem to take offense at a lead that is black and a lead that is female. For whatever reasons they doubt they could or should be that color or that gender. This indicates not just bigotry but a fundamental aspect of their bigotry that tells us far more about the biases of those so offended at John Boyega and Daisy Ridley being in the movie.

The setting of “Star Wars” is, simply, in the past in another galaxy. It is not our world, let alone our galaxy, nor our time. THe inhabitants of this setting, though we may call the human, simply are not us. They are, at best, “essentially human.”

But in the end these humans are aliens.

If someone subscribes to the idea that people of a certain skin color or certain gender have specific traits, there is no reason to assume they apply to “humans” in the universe of “Star Wars.” The people we think of as human are, as noted, aliens.  Whatever bias you have towards humans of a given race and gender, why should they apply to these humanlike aliens?

The racism and sexism flung at the new film, all other factors aside, reflect a lack of thought, a lack of depth, and a lack of imagination. There is little attempt to imagine a different setting or universe by those so biased against the cast.

Looking at this we realize that those acting in bigoted manners (beyond those just causing trouble) are treating their ideas of “blackness,” of “whiteness,” of “female” as universal traits. These concepts are immutable and inviolable to them. They are, essentially, religious beliefs.

(And this doesn’t even address the ridiculousness of said beliefs period.)

At this point we can see that these biases are even more limiting than they may originally seem. The bigots cannot imagine differently, or dream of a different world – or its equally likely they don’t wish to. Hey assume a tale of space wizards and psychic powers is constrained by their mundane ideas of skin color and genitals.

This likely explains the conspiracy theories and the like around “The Force Awakens” – if one sees race and gender traits as universal constants, then the only explanation one is left with for leads who are different races and genders than expected s some kind of conspiracy.  To imagine race and gender are as universal as the speed of light or gravity, then the only explanation a fevered mind can make is that those that deny these things are doing so actively and maliciously.

It reveals how limited, how sad these bigots are.  They’ve taken simple bias and made it the Word of God, and can’t enjoy a film because of it.

What got it to finally be written was watching people freak out over a black actress playing Herminonie Granger in a play of Harry Potter. If you haven’t heard of this, yes, really. When even J.K. Rowling chimed in that Herminoie didn’t have to be white it didn’t seem to help.

Really, people are offended at a character form whom her racial background does not have to be white are angry she’s white? I mean, really, why?

I also see this with gender in culture – the latest being people calling Rey, the heroine of Star Wars: The Force Awakens a Mary Sue (which has come to mean “female character as outrageously competent as male heroes, but she’s female so it bugs us.”). Or annoyance when a male character is gay. Or . . . the usual.

A character being white or nonwhite probably doesn’t impact me – as long as it makes sense (remind me to post sometime of why Clark Kent should or could be Hispanic). Gender doesn’t really matter as long as people avoid annoing tropes. And gay or straight? Are we still worrying about that? I mean I’m pretty straight, but hey, Chris Evans . . 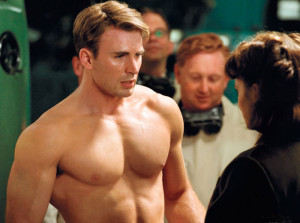 Anyway, Chris Evans’ pecs aside, I try to understand just how Straight White Male becomes something people are so invested in – and thus it’s so easily challenged by anytthing. Between Lady Thor and a Black Stormtrooper in Star Wars it seems there’s always some people ready to freak out about something not being right, or white, or having the requisite number of penises.

I’ve wondered why, and I think it comes down to that my identities were never totally along racial, gender, and sexual preference lines. They were constrained by those. My experiences were affected – I mean I’m a straight white guy who looks like Hugh Beaumont, I’m privlieged as hell.

But freaking out over John Boyega or whatever?  Not doing it.

The truth is I may be a Straight White Dude but my identity is not constructed about this nor dependent on it.  I am a geek, a coder, a writer, a thinker, a cook, and I see no reason to assume that looking like me and having the same sexual preference I do means we’re that alike.  In fact it seems the people who are big on being Straight White Guys live in a kind of prison of the mind.

In the end, I think a few things helped me:

I know I’m not free of bias, bigotry, or the affects of Extremely White Dude Privilege (see my above Beaumontness). I’m glad for the friends and family who point out when tse affect me (and they do). But I’m also damned glad my experiences and the people I know mean that I don’t go ballistic because Idris Elba may play James Bond.

I wish I better understood how to get other Straight White Guys to lighten up about things like that. The world’s much more fun when it’s diverse and you’re not some false default you can never live up to.