(This column is posted at www.StevenSavage.com, Steve’s Tumblr, and Pillowfort.  Find out more at my newsletter, and all my social media at my linktr.ee)

I’ve felt a disinterest in media lately.  It was only after some analysis that I understood how much media lacks intimacy.

Something has been itching at the back of my mind lately, a dissatisfaction with most media.  It wasn’t  hatredjust a sense of being unfulfilling.  I’m not saying the media were even bad, but I felt something was missing.  Instead of trying to scratch this itch, I leaned into it to learn it’s nature.

This sense of unease was tied to a recent interest in old alternative music radio shows, strange zines, audio ephemera, sound collages, etc.    Those things were unique, with passion for once-obscure (and still obscure) bands, remixing techniques, personal interests, and so on.  Each one was a little ball of itself.

Compared to that, many movies, television, etc. seemed so sterile.  Oh, it might be good, but the market is filled with works that look alike, everything is overhyped, and it’s impersonal.  There was a lack of connection there.  I could enjoy some crappy B-movies more than the big thing I had to see, with a few exceptions (Everything Everywhere All At Once, for instance).

This ‘itch” didn’t apply to video games, which was another clue.  I love Early Access games, being able to give feedback, and be involved in the process.  I also loved digging up strange, obscure, and unique titles to play, those visions giving form.

I understood then – I craved the intimacy of media involvement.  Of being involved in the creation and sharing it (like Early Access games, or Zines).  I missed things that were personal experiences with that sense of craftsmanship (Zines, alternate music, strange films).  With this in mind, I’m finding my interests again, often in the strangest places – of which I may write more in time.

I think our modern media, which often produces things that can be good, also creates works that are mass-marketed, polished, and targeted.  Things may be optimized, but optimization isn’t personal.  When you’re just caught within a statistics range, you know.

I suspect this is an unappreciated part of fandoms as well.  Some fandom experiences are intimate, with fanfic, art, cosplay, conventions, etc.  The flawed or over-engineered creation can bring people together, who then transcend the original work.  Fandom can add something to the experience of a media, a something I don’t think is fully appreciated by many.

So now I have a grasp of this itch, this sense of dissatisfaction.  I miss work that is connected, personal, and above all not over-engineered.  I miss media that helps me connect with people and indeed to the “bigger picture.”

I’m not sure where this will take my tastes, or my own creative works, but it’s going to be an interesting trip.  You’ll be along for the ride and plenty of blog posts – and what’s sure to be a connecting experience.

(This column is posted at www.StevenSavage.com and Steve’s Tumblr.  Find out more at my newsletter.)

There’s something about current pop culture that doesn’t really “pop,” doesn’t seem to engage us unless it’s heavily marketed and promoted. I wonder what can help us find stimulating, challenging work these days.

In fact, what do we want from pop culture beyond entertainment and common ground.

Serdar wrote about what he wanted out of pop culture . He described how really interesting pop culture work isn’t top-down, but feels that it somehow escaped into the so-called mainstream

“I kept coming back to that word, “escaped”. I like it when it feels like some piece of popular culture has gotten away with something. I liked that Blade Runner 2049 was essentially a $200M art film, because we should make more $200M art films, dammit. I liked that David Lynch’s Dune, for all that was wrong with it, also had a lot that was daring and unrepentantly weird.”

This is something I want as well. When I look back on my pop culture interests, I find these things that feel escaped, at that subvert things genuinely really appeal to me. It’s pop culture on fire, that honest lightning that strikes us easily as it’s “pop” and accessible, but also something that twists, advances, or subverts expectation. Good pop culture travels along our common cultural wires, but delivers an unexpected and enlightening shock.

Most of my pop culture tastes tend to this role. My Hero Academia mixtaped American Superheroes and classic Shonen ideas, threw in a liberal dash of body horror, and created a haunted funhouse of action. Farscape was the Adams Family to the Father Knows Best of too much washed out science fiction, subverting tropes while delivering drama with a smirk. One of my most-beloved video games was Dungeonmans, a comedic Roguelike game that deconstructed the tropes of its genre, while delivering an actual good game.

But a lot of pop culture is pop only in popular, with giant conglomerates churning out cautious product. It’s meant to be popular,its meant to be widespread, but it doesn’t have that jolt, that scruff, that edge that some other projects do. It’s safe on every level, but that also mean’s it’s not challenging. When something big subverts expectations – say Shazam’s embrace of the family idea or Bird’s of Prey’s over the top delivery – we notice.

At some point, I think things are just going to keep grinding away and be less interesting. We’re watching DC capitalize on Snyder Cut mania for . . . well, I don’t know what reasons. In this Pandemic, are we really missing movie theaters and the usual output? Right now our cultural changes are making us massively rethink our media and media choices.

Serdar and I have discussed several times that any big media company who wants to do more needs a skunkworks. You need to try a lot of different things and see which clicks. Hand people low-to-mid budgets and see what you can run with that allows really great and interesting ideas to “escape” from the confines of creators heads – and the current media machines.

But barring that, we creators, we indies, have to be the skunkworks. We’ve got to try wild things. Weve also got to market ourselves and each others. I’m not sure we can count on anyone but us.

(Note: Despite it’s many, many flaws, by I will defend David Lynch’s Dune as being unspeakably, daringly weird and bizarre. People gave him Star Wars money and he made a David Lynch movie.)

(This column is posted at www.StevenSavage.com and Steve’s Tumblr)

“Her Eternal Moonlight,” the look at female fans of Sailor Moon that my co-author Bonnie have been working on for 16 months is out. Available in both ebook and physical format! You’ve been hearing about it – now it’s done and it’s something I’m proud of!  Seriously, take a look at this cover by the amazing Jennifer Cox. 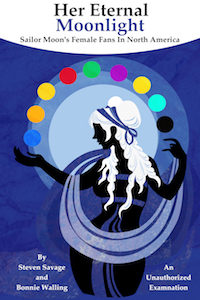 Yes, it’s finished! After interviews, writing, rewriting, editing, and more this “psychological travelogue” of how Sailor Moon affected her female fans in North America is finished. So now it’s time to let the world know (and by the way, you can help with that, start sharing the links)

This was a pretty amazing experience; interviewing people, understanding their stories, looking for patterns, weaving it into a whole. It was also a humbling one as the Sailor Moon media phenomena changed lives – and the whole 90’s DiC dub was far more life-altering than I’d expected. Doing a book on how a TV show changed others changed me, to be frank.

So it’s done. Bonnie and I will be looking to speak on it at various events, depending on our schedules – and we’ve already got an idea for another pop culture impact book. We just won’t start that one until 2017 because we’ve got this one, and I kinda need a rest . . .